INTRODUCTION
Hi fellow Smarties,
I am Adeleke Saheed, popularly known in the SmartCash community as @kingcrypto from Nigeria, West Africa. I am a Crypto-advocate, a Monetary Economist by profession, an Event planner by practice, a Data scientist and financial analyst, and a father. Since I discovered Smartcash, a decentralized economy with it huge potential, I have decided to stay around and succeed with the Smartcash family, and this is my pledge to you all.

DESCRIPTION
Public media (use of television and radio) has been a good innovation and an efficient means of advertising and marketing of businesses, products and services across the world today. Thus, the effects of public media promotion in business growth is inevitable in today’s world and has been the key factor that drive the positive trend of information growth.
After realizing there is little awareness and adoption of SmartCash cryptocurrency in Nigeria, I have decided to create the required mass awareness for SmartCash cryptocurrency and promote its adoption among fellow Nigerians with the power of public media. By this, I have started raising new local Smartcash vanguards and ambassadors who will support me in execution of this project and join the Smartcash mass awareness campaign training. I have equally created a whatsapp (https://chat.whatsapp.com/GlGiGUNaxSAKfRwUo9wELg) and telegram groups purposely for educating and training these new Smartcash vanguards and ambassadors about Smartcash cryptocurrency and the project at hand.

THE PROJECT (SMS - NIGERIA): WHAT WILL WE DO?
A standard survey of Lagos according to Geopoll Media survey shows that about 78% of the Lagosians own and watches television and about 85% of the population listens to radio which makes these two media, an effective and efficient means of information outreach for Smartcash cryptocurrency. I have intended to run this project for two (2) months with my team members which I am raising and training, and which the continuation of this project in the future will be based on the community’s decisions about the achievements and outcomes of this current proposed project. The project targets the Lagos state residents, business owners, Crypto-enthusiast, firms, merchants, local exchanges and students, all in Lagos State.

This project will feature:
·        An Eight-weeks “Smartcash Home drive” on the radio with Kingcrypto.
·        An Eight-weeks “Smartcash TV series” with Kingcrypto.
·        A Smartcash Public Seminar/workshop for business owners, firms, local exchanges, merchants and private individuals in Lagos State.
All video report of the programs will be shared on all official SmartCash sources. In addition, written reports will be made and submitted concerning each week media programs.


SMARTCASH HOME DRIVE
Smartcash home drive is a media awareness program that will run for Eight (8) weeks on one of the most listened-to radio station in Lagos State with a listening population (traffic) of about two (2) million people according to Geo poll survey. The program will hold on the radio in the evening at around 5:00-5:30pm, which revolves around the period Lagosians closes from work and drive home. The program will hold twice a week on the radio, on Mondays and Wednesdays at the stated period (5:00-5:30pm).
Smartcash home drive will feature discussions and enlightment about Smartcash; it uses and adoption; introduction to Blockchain technology and becoming a member of Smartcash community. In addition, for the radio programme, the Smartcash theme song by @Marshallife will play on the radio to lighten up the listeners and promote Smartcash. Series of questions that borders around Smartcash cryptocurrency, it use and adoption, blockchain technology and the future of Smartcash cryptocurrency will be entertained and answered on the radio. In addition, gift of free Smart token will be given to some listeners based on their contributions to the program, as this will enhance more participations of people. Website link of the radio show will be sent to the Smartcash community to enable community members join the program live and contribute if necessary.


SMARTCASH TELEVISION SERIES
Smartcash television series is another media awareness program planned to hold on the TV once a week for Eight (8) weeks. The program will show on Saturdays at around 5:00-5:30pm in the evening, at a time that Lagosians will be at home and would be on the TV. Smartcash television series will feature discussion and enlightenment; marketing and advertisement of Smartcash, use and adoption of Smartcash and becoming a member of the Smartcash community. In addition, we will invite a merchant/exchange business owner to each weekly TV series to enhance merchant integration and business conversion services, and gift of free Smart token will be given to some viewers based on their contributions to the program, as this will enhance more participation of people.


BENEFITS OF THIS PROJECT TO SMARTCASH
·        The Eight weeks public media program (radio and TV) will trigger mass awareness and the name Smartcash will roam the streets of Lagos in short time, thereby making Smartcash known and adopted by many.
·        The media program will discuss and enlighten the masses of the advantages of Smartcash over other cryptocurrencies, features and services rendered by Smartcash. By this, we will also advertise and highlight various Smartcash projects, products, services and innovations that are not available to other cryptocurrencies, which includes the Desktop wallet, the Mobile wallet, the Electrum wallet, the proposed Paper wallet and Hardware wallet, the Smartband, SmartReward, SmartNodes.
·        By issuing of gift of free smart token as bonus for contributions on the radio, more smartcash wallet will be created and subsequently, they will be encouraged to adopt and use Smartcash cryptocurrency.
·        Inviting merchants and exchange business owners to the TV series will help trigger business adoption and merchant integration as well as exchange and conversion services for Smartcash in Nigeria.
·        The Smartcash Public Seminar/workshop for business owners, firms, local exchanges, merchants and private individuals is intended to raise more vanguards that will be ambassadors of Smartcash and as well attract and educate more business owners, firms, local exchanges and merchants on how to key into the evolving cryptoworld by adopting Smartcash cryptocurrency. 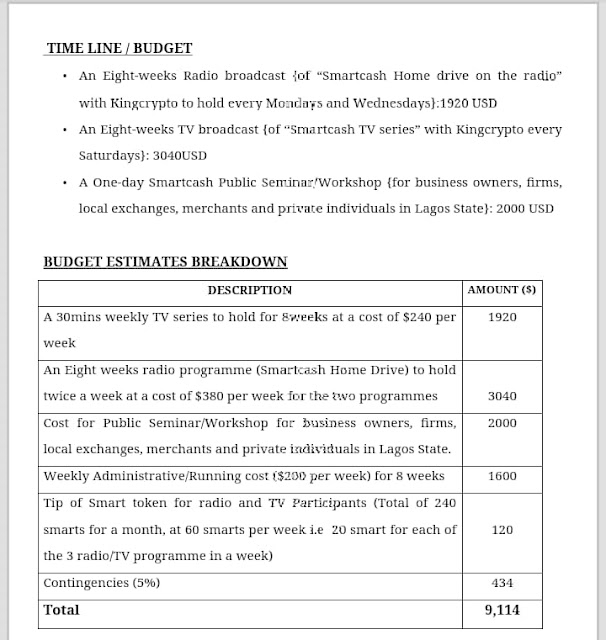 THE MEDIA HOUSE PARTNERSHIP
For this project, the support and partnership of some media houses (a renowned radio and a television station) have been sorted. These media houses already have our ‘letters of partnership request’ with them and are ready to cooperate with us in the project execution. The power of internet radio services added to radio stations services and cable televisions in Nigeria will enable people within and outside the Lagos states and Smartcash community members to listen to the radio shows and watch the television series broadcast. In addition, website links will be sent to the community discord channel prior to the radio talk shows to enable community members listen to the program.

JUSTIFICATION
All recorded videos of the radio and TV programs, pictures and official reports of this project will be sent to the SmartCash community and other official Smartcash source. Furthermore, Instagram and YouTube will be used to broadcast live videos and do all necessary updates on the great projects happening to enable it be viewed worldwide.
In addition, we will adopt http://smartcashafrica.org for sharing of the information and website links will be sent to the community discord channel prior to the radio talk shows and the TV broadcast to enable community members listen and watch to the programs. Check your admin and contingency cost. The proposal terms and conditions don’t allow over 15%.
https://vote.smartcash.cc/termsandconditions

Otherwise, getting businesses to participate is a good idea. You can also show the SmartCard and how it works which will be very useful for businesses.

Thanks @Solarminer for the observation, really appreciate

The budget estimates below shows how I arrived at $9,114 (from a total of $9,114.003) and further shows a breakdown of the Administrative/running cost (which initially included; Cost of transport, photography, logistics, and printing of beginner’s guide, and newspaper post) which were all combined as running cost. 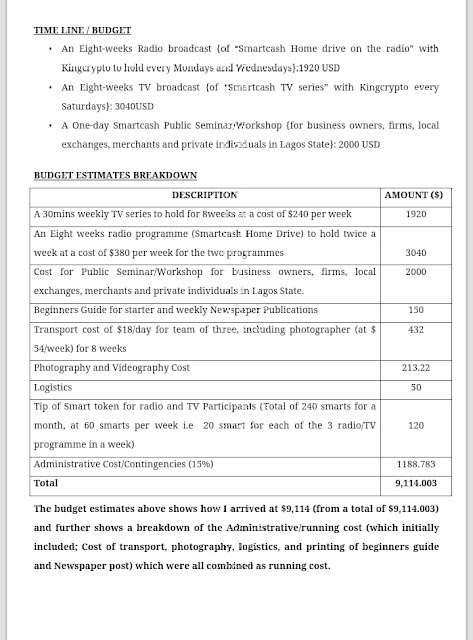 Seems like a good proposal. How would you propose to measure success of this project?

Thanks @mark-smartcash
Sure you always crave the best for SmartCash, that’s what I know you for… Nice one

The program will create necessary awareness required to increase adoption and usage of our cryptocurrency. We have planned the programme in such away that a member of the project team will be incharge of contact, educating and mentoring callers who shows up during the programs. We have planned to create a log of callers and make a post-Radio/TV connection with them and also ensure they not just be educated and use Smartcash, but also join the Smartcash Community to move this cryptocurrency of ours forward.
Also, the idea of bring merchants and business owners to the program is to build connections and commit their interests in adoption and usage of Smartcash cryptocurrency. The idea is that, each merchant and business owner invited will be encouraged by all possible means and ensured to adopt and use Smartcash cryptocurrency.
Consequently, after collating the information of callers and interested individuals and making a log to use in connecting, educating and mentoring them on adoption and usage of Smartcash, we will send weekly report of the programmes and progress on adoption and usage as already mentioned in the project proposals.

I have been working on building a formidable team of at least 10 people, who will be incharge of the post-Radio/TV programs connection, education and mentoring 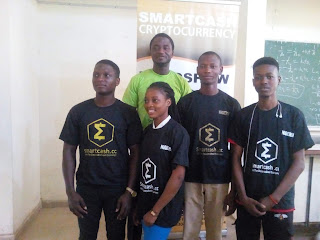 They will work with the collated phone log and get more people to adopt and use Smartcash and give weekly reports on their efforts.
Further more, tip of free smart token goes to only people who open new wallets, this is believed to encourage them towards the use of Smartcash cryptocurrency.
marshalllife 2018-06-26 14:27:28 UTC #8

do not PM me to vote for your proposal

thats pretty unprofessional. reach out to the community. messaging me in private wont help you with your votes…

grinning
This is not yet out for Voting
I am asking you to View and Comments on the proposal forum
And I will be glad, if I get your reply

You have my support. Best of luck.

Hi! … You need to be more specific about the cost. What do you pay with each Smart. What does administrative cost includes? is it a Salary for you or what’s that?

What Bills justify the amount asked for ?

Remember than we can know how much stuff cost in Nigeria and usual salaries - Can’t Ask for More than what it could cost!

Lately people does not seem to be willing to pay a lot for projects ; Keep it simple and show that you are saving on expenses would be a good idea.

Really need to be more specific on expenses themself.

Maybe you can provide actual radio station and services Quote … ?

Thanks @everyone for the comments and concern for the project, I really feel encouraged by your ideas.

Consequently I will get in touch with the selected media houses to request service-price catalog for their radio and television services.

Having updated information does help. Good to check on that and provide the latest information about the broadast, audience, reach, and costs. 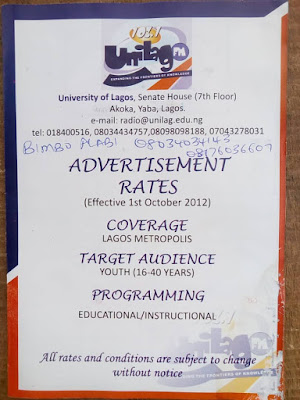 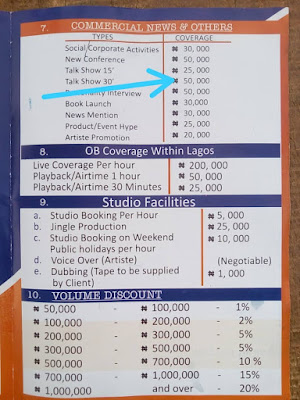 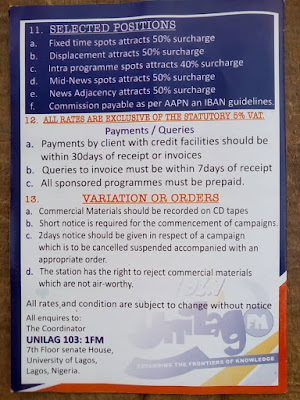 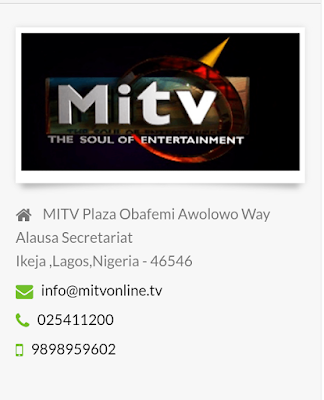 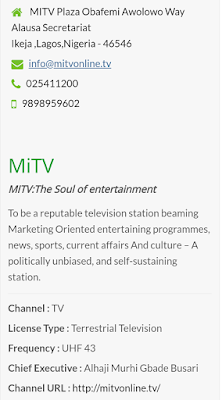 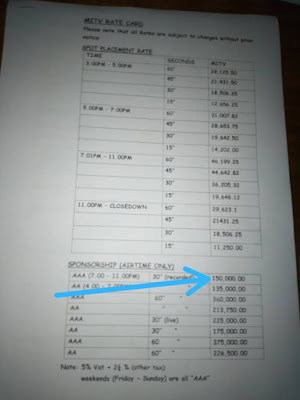 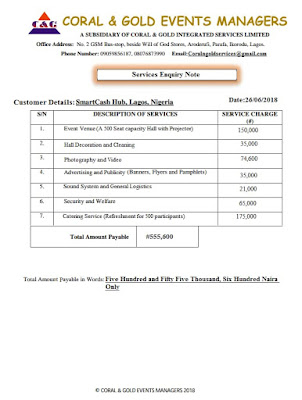 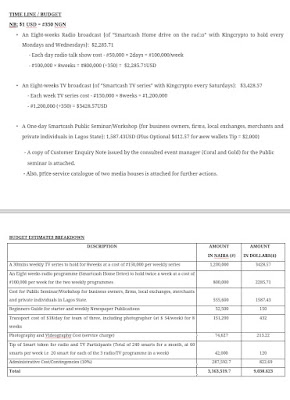 Thank you for coming up with a way to reach people who might not hear about Smart. Most proposals center around meetup’s and youtube videos, I love the new direction you have found to reach more people!

In the Mass communication landscape of the 21st century, the media plays an outstanding role.
Living with the digital media has become commonplace for many people.

We aim to reach out to a large audience, various population groups and the public at Large, to sensitive them on SmartCash.

They are found wherever the target persons are, on the way to or at work, restaurant, train stations, office, at airports and at Homes.